Where do I begin??

If you’ve never had bibimbap- PLEASE go out to a Korean restaurant and get yourself an order of this. It is truly amazing and when you come back, you can make your own with this recipe! If you don’t know what bibimbap is, it is a well-known Korean dish that is essentially mixed rice with meat and mixed vegetables. We have no meat in this recipe, but if you aren’t vegan, you can add whatever protein you wish.

I like to think of bibimbap as a deconstructed fried rice. It is presented with the crispy rice in the center of the bowl and then the protein and veggies surrounding the dish. Usually it is served with a fried egg on top (which we will also forgo-although my husband loves an egg on his) and a spicy red chili sauce-gochujang!

I never knew what this bowl of heaven was until about three years ago when I first stepped into a Korean restaurant. As many of you know, I’m a teacher and one of my students’ parents were opening up their own restaurant near our school in Brooklyn. They were so kind to let my whole class come in and try some of their dishes like dumplings, kimchi fries, some type of noodle dish and a few others. The kids had a blast and I was addicted!

I came back the following week with a few coworkers for dinner to have the full dining experience and got my first vegan bibimbap bowl. Oh, my, goodness. I was in love instantly.

All of the veggies were sautéed and seasoned perfectly, the rice was crisp on the bottom from cooking in the stone bowl and the spicy sauce was just right. I knew I had to go home and try to recreate this.

Too bad my first attempt didn’t turn out so well. It’s been 3 years later and I’m finally trying it again and this time it’s wonderful. You don’t have to have the authentic stone bowl to make this dish- however I have to say it is 10x better with it! You can get a pretty inexpensive one on Amazon here, or kind a local Korean cooking supply store.

I’m lucky enough to live right across the river from NYC and have many options to choose from! I visited Korin last week and picked myself up this stone bowl for only $20. My husband however too is now addicted to bibimbap, and I guess I’ll have to go back and buy another bowl so we can eat at the same time.

The key for this dish is you want to prep all your veggies and rice ahead of time. Get all the chopping done, cook the rice and set aside until you’re ready to assemble.

Start by getting a large sauté pan and add 1 tsp of sesame oil. Add one of your veggies in and sauté until al dente and golden. Take the veggie out and add another tsp of sesame oil and repeat with each veggie until you are done.

The veggies I choose were: carrots, mushrooms, bok choy, cucumber and sprouts. The only vegetable I didn’t sauté was the sprouts. Instead I boiled some water in a microwave safe bowl and then plunged the sprouts in to soak for a bout 3 minutes. I then drained them and tossed them in some sesame oil, rice vinegar, salt and set aside. You can totally sauté them though or leave them raw.

Cooking time for each veggie:

Mushrooms- about 8 minutes or until tender and golden

Cucumber- about a 30 second sear

Tofu- 4 minutes on each sides until golden and crispy

Remember to add in a tsp of sesame oil and a sprinkle of salt for EACH veggie. It is really important to get that sesame flavor distributed throughout.

Next it’s time to assemble.

Get your stone bowl (or if not using a stone bowl, use a small sauté pan). Brush the bottom of the bowl or pan with a tsp of sesame oil. Add on about 1 cup of rice to the middle of the bowl and add the veggies around the rice on the sides- arranging them how you wish.

Cook on a medium-low heat for about 6-8 minutes. If using a bowl, you should hear a nice crackling sound happening- THE BEST SOUND EVER. Sometimes I will put a small cover on the bowl to help heat up all the veggies again but it isn’t necessary.

Carefully remove from the heat and serve with gochujang sauce! A little goes a long way. If you don’t have gochujang you can replace with sriracha, but it definitely isn’t the same. Stir the bowl up together and let it cool down a little before you dig in- otherwise you will burn your tongue- trust me. 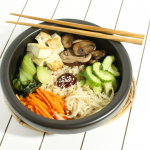 You can find store bought gochujang sauce in many grocery stores or make your own with some red chili paste! Sriracha is also a great supplement.