Happy St. Patrick’s Day everyone! I’m sure many of you have some fun plans for the day and are getting out and celebrating! But, if you’re like me, this year my husband and I are keeping it low key and just staying home, relaxing and maybe having an Irish beer later. Tonight I’m whipping up my super simple and delicious vegan shepherd’s pie! I am IN LOVE with this recipe.

The filling is really easy to make and a few ingredients really make it taste “meaty” that makes my husband go back for seconds and thirds!

We’re going to start by sautéing some onion, celery, carrots and garlic in a large pot with a little olive oil. You can omit the oil ya want 🙂 Then we are going to add in a WHOLE shredded eggplant. Peel the eggplant first and then simply grate it on a box grater or you can shred it in a food processor. After the eggplant is added in, drain and rinse 1 can of green or brown lentils then throw them in the pot.

Your kitchen should be smelling amazing at this point…

After that comes the secret ingredient-  Red Wine. Perfect excuse for you to pop open a bottle and pour yourself a glass while your cooking. Or if you’re like me, you might already have an open box laying around to calm down those stressful nights after work- who’s with me on that?

Add 1/2 a cup of red wine into the pot along with 1 cup of vegetable stock and 2 tablespoons of flour and mix it all up. Let the filling simmer for about 5 minutes until it begins to thicken. You don’t want it to be too runny. On to the potatoes! Now…hear me out everyone… for this recipe I used…

Yes I know, crazy right? But I had a box laying around for a while now because I have always been interested in trying them. The ones I used were from Idahoan  I liked this brand because the ingredients were just potatoes, an emulsive and a preservative. If you’re totally not into instant mashed potatoes though you can make your own mashed potatoes for the top. But I will tell you- I was surprised at how good they were and my husband didn’t know the difference and was shocked when I told him after!

I followed the instructions on the box, minus some of the vegan butter- I didn’t think it needed that much. I also used almond milk and I think they turned out great!

In a large casserole dish, pour the filling in and smooth the top over. Then carefully add the mashed potatoes on top and spread it evenly not to disturb the filling. Bake it at 425 degrees for about 25 minutes or until the top is golden brown.

You’ll be tempted to dig in right away- but you WILL burn your tongue. So wait for it to cool for about 10 minutes before scooping yourself a portion. 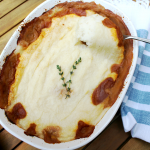